Since the first day that I started Three J Productions, LLC my goal was to take 3JP's collection of comic book characters from the printed page and branch out into the animation and film industry.  My absence from the blog these past few months has been due to my desire to reach this goal.

I've been using my time away from the blog to network with some very talented filmmakers, which has allowed me the opportunity to invest financial and promotional support to several film projects.  These projects are not the property of Three J Productions nor do they feature the company's characters.  But the film projects do represent a move in the direction that I want to take for the company, which is to make it more than just a comic book company, but an entertainment media company that has Intellectual Properties that span all avenues of entertainment distribution, from Film, TV and Web.  My association with the projects and with the filmmakers has taught me some valuable lessons about the film making process.  I am confident that the lessons I've learned and the relationships I've made in the film community will help me reach my ultimate goal.

To learn more about the film projects that I've been attached to as a producer and associate producer you can go to my IMDB page by following the link below.
http://www.imdb.com/name/nm5033837/ 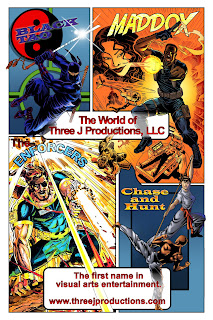 As always, I thank all of you who have shown your support to Three J Productions, LLC and hope you will continue to support 3JP as the company moves towards bigger and better things in the coming years.  Also, check the blog for future updates about upcoming publications like the Black Tao graphic novel, Chase and Hunt(TM) in an all new adventure and the ongoing exploits of The Enforcers.  Three J Productions, LLC the first name in visual arts entertainment.(TM)   - Carl Herring Jr. President Three J Productions, LLC.
Posted by threejproductions at 9:46 PM No comments: