This month's superhero spotlight is on Jonas McCabe.  Although not a superhero in the traditional sense; Jonas McCabe's adventurous exploits during the post Civil War era as a bounty hunter and US Marshal in the old west are filled with heroic deeds.  To many, Jonas is a hero, to others he is a bounty hunter to be feared, but to all who come to know him, he is a legend.

Jonas McCabe is born to slaves and the lone survivor of what has become known as The Potter's Field Massacre.  As an infant he is rescued by a white man and his Cherokee wife to be raised as their son and as a free man.  He is taught to believe that a man's worth is not determined by the color of his skin, but by his actions and deeds. 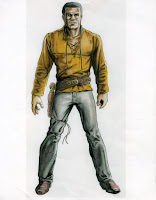 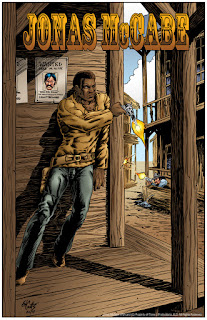 Jonas McCabe created by Carl Herring Jr. and is Trademark and Copyright Property of Three J Productions, LLC 2016.
Posted by threejproductions at 9:11 PM No comments: