After a little hiatus from the comic book industry and from the convention scene, I find myself amazed at the level of energy and enthusiasm the fans show for an industry that has been pronounced dead more than once.  Comic book sales may not reach the levels of its heyday but the love the fans have for this industry is unwavering.

The love was on full display this past Aug. 16-18 at the Fan Expo Boston 2019.  The three day event hosted the likes of John Travolta, Izombie's Rose McIver, the cast of Boy Meets World and the list goes on.  For me it was a great day of fun meeting up with some of my friends and colleagues in the comic book industry, but the highlight of the day was meeting one of my favorite actors.  Here I am pictured below with the one and only Michael Colter, the star of Netflix's Marvel series Luke Cage. 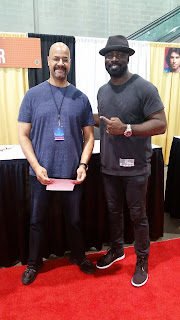 I had so much fun this year, like the rest of the fans I can't wait for Fan Expo Boston 2020.

Posted by threejproductions at 6:05 PM No comments:

Aug 9th to 11th -2019 was the dates of the always fun Terrificon at the Mohegan Sun in Montville, Ct this past weekend.  I attended the Con on Friday and made the rounds to the various vendors and met up with some old friends from the comic book industry.

The highlight of the day was when I met actor John Wesley Shipp who starred in one of my favorite shows from the past.  Mr. Shipp starred as Barry Allen on the CBS superhero series The Flash from 1990 to 1991 and now has a recurring role on the current CW network's The Flash series.  It was a pleasure meeting Mr. Shipp and getting his autograph, plus a photo with him and I together. 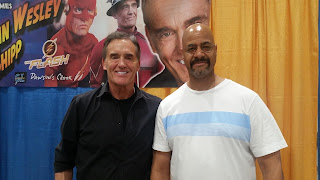 Before leaving the Con I had to make my way to the Batmobile exhibit.  Here is a picture of me with my friends and the Dark Knight himself as we stand next to two versions of the Batmobile used in the Batman movies. 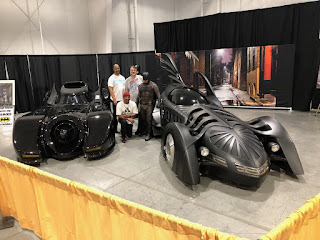